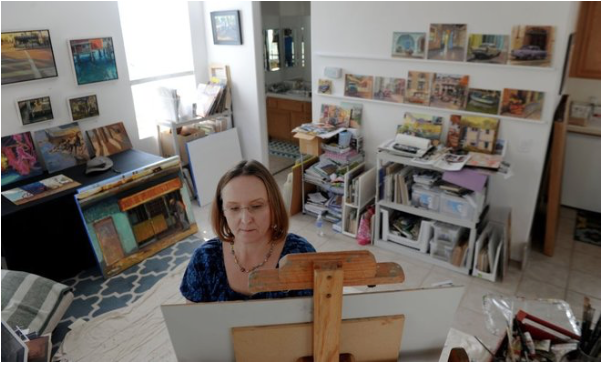 photos by JUAN CARLO/THE STAR Anette Power paints inside her studio in Newbury Park. She recently went on a painting trip with a group of artists to Cuba. The aim of the trip was to record what Cuba looks like now, before it is filled with franchise food outlets.
Posted: Yesterday 3:00 p.m.

Anette Power recently went on a painting trip with a group of artists to Cuba. "It is a paradise for painters because of all the colors," she said.

Anette Power's paintings of a recent visit to Cuba are shown inside her studio in Newbury Park. She fell in love with the colors, textures and the old vintage cars (1957 Chevrolet, upper left; 1956 Buick, upper right; 1957 Chrysler, lower right).

JUAN CARLO/THE STAR Anette Power, who went on a group painting trip to Cuba, said, "the old classic cars speak of history and I feel as an artist I want to document their time here."

JUAN CARLO/THE STAR Anette Power's paintings of a recent visit to Cuba are shown inside her studio in Newbury Park. Although the architecture and cars were the initial draw for her, the gracious people she met left a lasting impression.